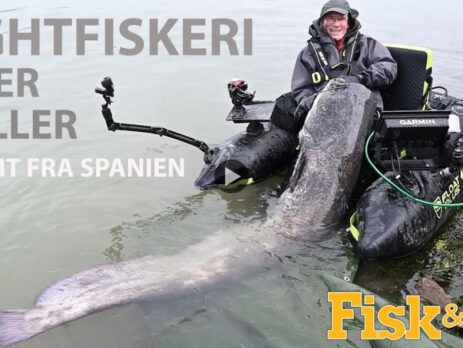 In November 2022, Jens Bursell caught the – as far as we know – biggest freshwater fish ever landed by a Dane on spinning gear. In this video you get the story of the wild fish that was the result of a week of hard and quite difficult fishing with float and Livescope in the Spanish river Rio Ebro in Aragon.Imagine what it feels like to cast out and watch the softbait descend through the water on your Livescope, as you slowly jig it over the snout of the dream fish of your life, which is clearly marked on the screen so you can see all the details – live. Or – how it feels when you see the giant on the screen taking the bait, while a nanosecond later your rod is snatched out of your hand, while the monster fish on the awkward brake rips you around – crusting its butt into the water so that you are almost water-skiing behind the fish, with every second feeling like being pulled out of the flotation ring; high heart rate, long arms and a heart that almost jumps out of your throat…. Wilder it doesn’t get.

Along the way, there are plenty of tips on float fishing with Livescope and examples of how to tackle this super exciting fishing in purely practical terms. In the film, you fish vertically with a worm – as well as sight fishing with a spider, and you can look forward to an action-packed film with lots of fishing fun, frustration, difficult fishing days – and finally the reward with the wildest dream catch.

"Good service, clear explanation and fast delivery. And as far as the product itself is concerned: Really nice! The whole thing looks really neat, and works perfectly."

"Fishing is my greatest hobby, and since a few years I have also discovered the belly boat. With this system float plus, I can reach the beautiful spots much easier and therefore catch more. I am sold!"

"Since I discovered it, I can't think of a single time I've been on the water without it. And on several occasions I have trolled about 8 kilometres and still have half a battery left. Really worth buying."

"Super service at Floatplus. When my remote control malfunctioned, it was replaced immediately so that I could get back on the water! I can only recommend the company and the products to enjoy carefree Bellyboating."